The Flint Creek Watershed drains approximately 36.5 square miles (23,374 acres) of land in Lake, Cook, and McHenry Counties.   Prior to settlement, the watershed lands were diverse and dominated by prairie, upland forests, marsh and we prairie and sedge meadows.  These communities were mostly maintained and shaped by periodic fires ignited both by lightning and the Native Americans that inhabited the area.  During these  times most of the rain and snowmelt was absorbed in the upland plant communities and within the extensive wetlands that existed along stream systems and in other low lying areas.  Infiltration and absorption of water was so great that many of the defined stream channels seen today were little more than sedge and grass-dominated swales.  The water quality was excellent.

Today, Flint Creek shows many of the same problems documented in streams in adjacent watersheds and in watersheds across the country.  Many stream reaches (a length of a stream or river used as a unit of study, generally containing a specified feature that is fairly uniform) suffer from typical conditions caused by urban development.  These include eroded streambanks, poor native vegetation extablishment or narrow riparian buffer plantings, degraded in-stream habitat, sediment deposition, invasive species, and ultimately poor water quality.  These conditions usually result when streams begin carrying increased rates and volumes of stormwater runoff related to urban development.  As with many urban streams, the surrounding communities use Flint Creek largely for flood control and as a destination for stormwater.

Increased national concern about urban “non-point” sources of pollution – pollution resulting from many diffuse sources – in contrast to “point” source pollution which results from a single source, led to the development of management recommendations for the watershed that can be implemented by local stakeholders.  In 2006, the Flint Creek Watershed Partnership was formed to update a 1994 study, and to develop a “Watershed Based Plan” in 2007, which has been updated in 2018.  These plans are approved by the United States Environmental Protection Agency and qualify the municipalities and non-government organization to apply for federal funds to improve the watershed.

Below are examples of some of the varied environments in Flint Creek. 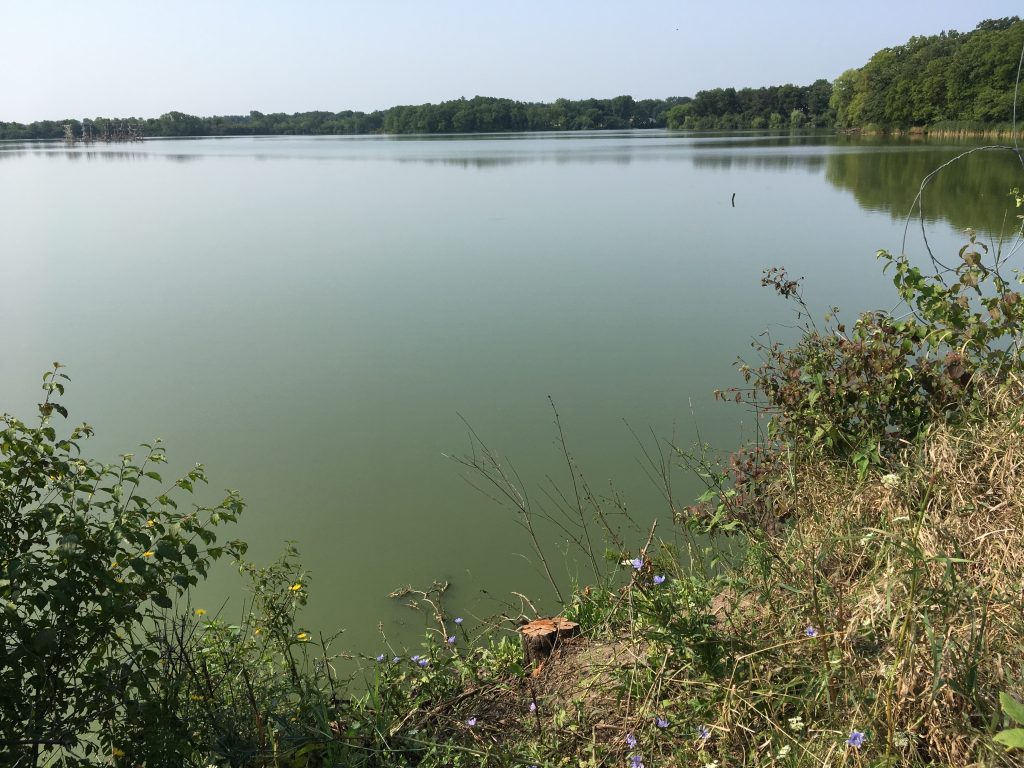 Watersheds can consist of lakes, streams, wetlands and marshes, including man-made constructions, such as detention ponds. Baker’s Lake is the “headwaters” for the East branch of Flint Creek, which flows through Makray Golf Course, Fox Point, Cuba Marsh, Jewel Park, and Barrington. It joins the South branch just west of Barrington High School 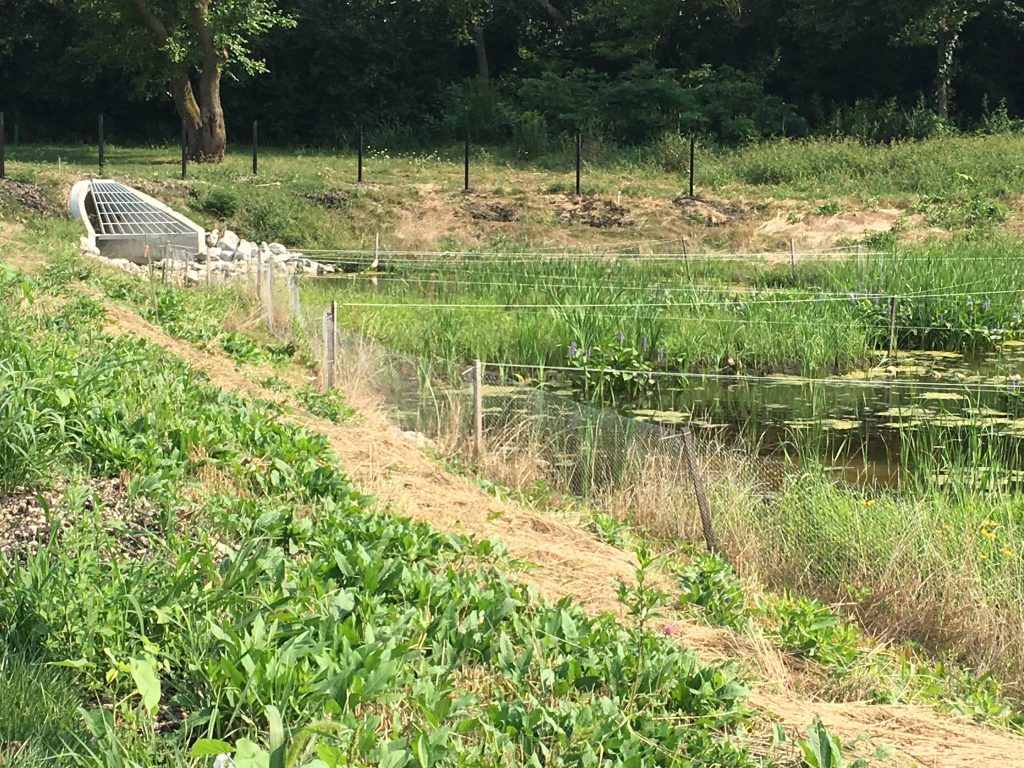 The Village of Barrington turned Miller Park into a detention pond to reduce flooding in the Summit area. The Village grows native vegetation there due to their natural abilities to filter out pollutants  stormwater gathers as it runs off pavements and yards, and into Flint Creek. Native vegetation is also more effective in absorbing waters due to their extensive root structures.

Cuba Marsh is a 781 acre nature preserve with hiking/piking trails.  The preserve is a lovely blend of marsh, woodland and grassland.  The wetland supports many species and is a local vantage spot to view waterfowl, lick the pied-billed grebe and American coots.  Cuba Marsh provides flood relief to nearby homes and filters the waters that flow into Flint Creek.

Flint Creek has long had pollution issues, especially excessive  phosphorus, a nutrient, and too much TSS (total suspended solids) which make the water cloudy.  Lakes in the Flint Creek Watershed often have the same problem as the Gulf of Mexico – with dead zones caused by oxygen depletion.  This is caused by decaying plants and algae which flourish on the excess nutrients that wash down the creek or from runoff from bordering turf lawns and impervious roads.

The Illinois EPA reports on the impaired water quality of streams and lakes every other year in its Integrated Water Quality Report and 303d Lists.   Flint Creek has been on the list of impaired waters consistently, although there has been improvement since the first Watershed Plan in 2007:  In the 2006 report, Flint Creek was a category 5, the lowest.   By 2018, Flint Creek was still impaired, but had dropped down in the priority list to the middle 500’s.  In 2012, the Illinois Department of Natural Resources conducted fish surveys in the Fox River Basin as part of a Statewide program to monitor the health of Illinois stream resources.  Flint Creek scored only 13 on the Index of Biotic Integrity (IBI) scale of 0 to 60, the low end for the Fox River tributaries.  The IDNR measured the Fox Basin again in 2017, and we hope to have those results soon!

Below, we have links to the 2018 Watershed Plan Update, and recent quality reports 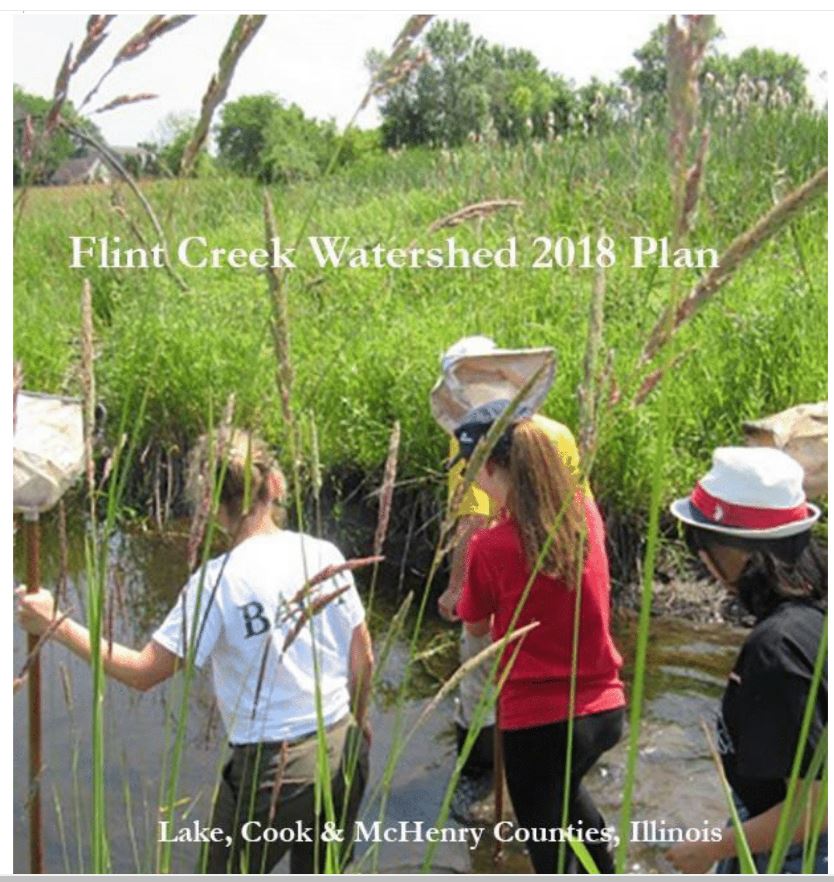 Click Here to view the Flint Creek Watershed 2018 Plan.  The Appendices will be in the next section.  A watershed plan reviews the history, geology, soils, growth projections, and plans for addressing the watershed’s flood and pollution issues in a regional planning framework.

APPENDICES to the Plan will soon be added here. 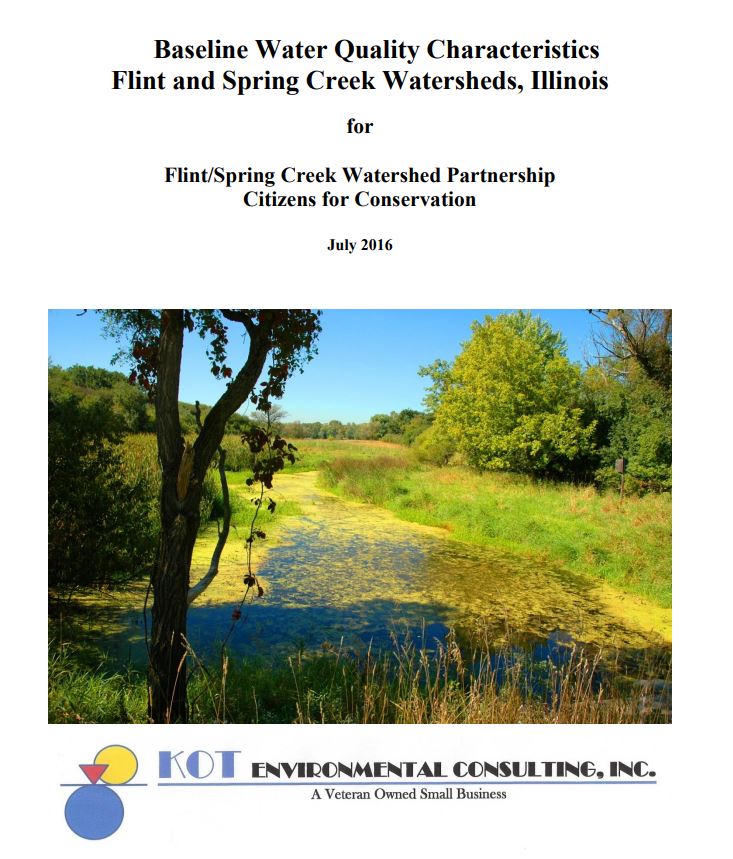 This website will share information about our watersheds, water quality, water supply, and how important residents are in improving our water resources.  Please join us in learning about our watersheds, the importance of restoration for cost-effective improvement of water quality leveraging natural resources, and future challenges due to changing rain patterns, continued development, and tighter budgets.  Stay tuned!