An aquifer is a geologic formation that can store and transmit water to wells, springs and some streams. An aquifer is more like a sponge than an underground river: geologic materials have connected pores that allow water to move from one space to another.  The picture above is a 3-D rendition of the shallow aquifers in our area.

The residents of the Flint Creek and Spring Creek Watersheds are almost entirely dependent on aquifers for their drinking water supplies.  Lake Zurich and parts of South Barrington and Hawthorne Woods are supplied by wells to the deep aquifers, and most of the rest of the area is supplied by wells from the shallow aquifers.  Water consumption has increased due to population growth and development, and is likely to continue.   For most of our area, there is no apparent alternative source of water (municipalities are not in the Lake Michigan watershed).  Similarly, with much of the area on individual or subdivision wells, there is little piped infrastructure for the delivery of water.  Developing that infrastructure would be expensive.

A challenge with wells and aquifers is that it is difficult to know the water levels in the aquifers, how quickly they refill, or “recharge,” and how quickly they are drawn down.  Another challenge is aquifers are a resource held in common by the public, so their use depends on everyone being careful and reasonable in their water use, and their care of their wells.  While village wells track how much water their wells draw, private wells and even some subdivision operated wells do not.  Individuals on well water are responsible for their water use.   Since water from homeowner wells is not metered, homeowners often have no idea how much they use which makes it easy to overuse.  Water is not unlimited.  Water supply failures can be expensive.  In addition to the inconvenience of not having water, many well-owners would have the additional expense of drilling deeper wells to find more water, which is not guaranteed.  Some communities, such as Lake Zurich, parts of Hawthorn Woods and South Barrington, tap into the deeper sandstone aquifers.  Those aquifers sometimes have other issues, as the sandstone aquifer waters often have an excess of radium or strontium, both of which are known carcinogens, and require additional treatment.

Surface water, such as lakes, rivers and streams, and groundwater are interconnected.  Groundwater and surface water can actively feed one another.  As a matter of fact, the primary source of many streams in the U. S. is groundwater.  Surface waters can actively gain or lose groundwater, depending on the water table.  When more water is continually pumped from aquifers than is replenished, a condition called “overdrafting,” it can lower the water level, which can deplete the supply that would ordinarily feed streams and rivers.  This could also mean changes to the thousands of acres of natural areas in the BACOG area if groundwaters were no longer adequate to sustain waterways and natural areas such as woods and wetlands.

State studies predict there will be a downward trend in water levels in the coming decades due to increasing development.  The Barrington Area Council of Governments, McHenry County and the Illinois State Water Survey have invested in monitoring  water levels (more information under the Quality and Monitoring tab).  Water level data can provide an early warning system of “what we need to do” in future years to protect the shallow aquifer system that is virtually the sole water supply for our two watersheds.

Our area is fortunate in that the western lands in the Spring Creek Watershed are in a “rapid recharge area” for our watershed.  That means that rain and snowmelt can reach our aquifers quickly – from a few hours to a few weeks.  This can be a two edged sword, as it also means that rain runoff that picks up contaminants in those areas can quickly reach the aquifers. Currently, many of the “rapid recharge” lands are open space, due either to the Forest Preserves, large lots, or farming areas.  Some are in more dense residential areas too, such as Carpentersville and Fox River Grove.  Below is an aquifer recharge map developed for BACOG.

Not all of the precipitation that falls goes into groundwater.  Some evaporates, some runs off into streams either directly or via stormwater drains.  Some is absorbed by plants, with more being absorbed by long rooted native plants which help hold the water in the soil.  Short rooted plants – such as turf grass – are almost as ineffective on runoff as hard pavements.

Generally speaking, if the rate of stormwater runoff can be slowed, some of the negative effects of urbanization can be reduced, and the higher the probability that more of the precipitation will percolate down to the aquifers.

We may some day soon have to design ways to recapture stormwater to use it.

This is becoming more important as the Illinois Department of Natural Resources (IDNR) and the Prairie Research Institute (PRI) held a scientific summit in June 2017.  The Illinois State Water Survey (ISWS) were key participants. “Experts found that climate variability and change will likely impact Illinois’ residents, infrastructure, and economy in the future. Rising temperatures are expected to increase human health risks and energy demands. Agriculture is expected to be impacted through increased stress on crops from warmer temperatures and a possibility of longer dry spells between rainfall events. Water supplies and demand, as well as water quality, are at risk. Flooding is expected to increase, along with anticipated impacts to insects and wildlife across the state.”

Currently in northeastern Illinois, the most urgent water supply issue is the 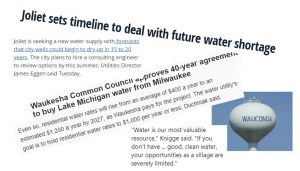 depletion of the deep sandstone aquifers in the southern and western suburbs, especially Joliet.  There are hundreds of thousands of residents and many industries that depend on these aquifers.  While the situation is most dire for Kendall and Will Counties, depletion will impact Kane, DuPage and McHenry Counties, and perhaps beyond.  Some projections suggest there are fewer than 20 years of deep aquifer waters at the current usage rate left.

Our shallow aquifers are like a “water savings account” for our area of northeastern Illinois.  In the near future, it is likely that we must take greater care to avoid overdrafting that account and to increase our “deposits” (recharge)!  Our alternatives are limited, and all are expensive.